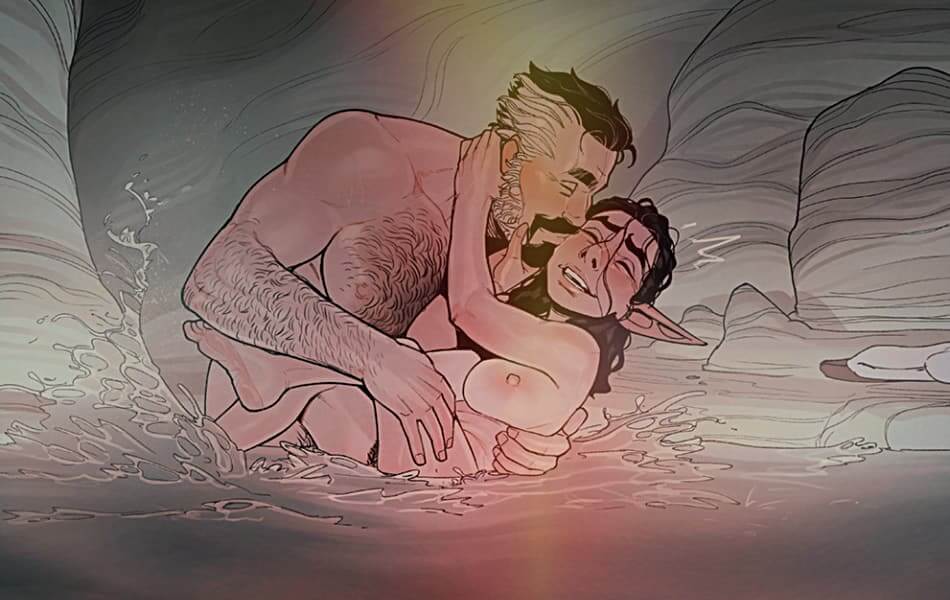 #1 - The undisputed reference standard for the genre: The Invitation

This smart comic series not only turns you on physically but sets your mind on fire. Released by InCase, it consists of two parts. A paranormal scientist William Loving III gets hold of a powerful artifact that deprives him of his male human nature and turns him into a feminine demon, serving obediently to his supernatural master. Apart from the main character, the sinister spell affects his fiancé Annie Marie Bowyer as well. She also becomes a slave to the incognizable force, and the plot of this NSFW comic is based on the gradual and drastic transformation of both.

The author, Niki Smith, sends the protagonists of this work of art to a geek convention. If you frequent such type of events in offline life, you might recognize yourself in one of the characters. The convention digresses from its main topic and immerses its attendees in gender exploration and sexual discoveries. All the skeletons get out of their closets, secret crushes are discussed openly and suppressed taboos become a normal and welcomed agenda. This graphic novel is sexy, refined and highly authentic from the psychological point of view. You can indulge in it in digital format or order a softcover copy from the Iron Circus Comics publisher site.

We owe this one to Tina Horn and a talented team of illustrators that consists of Alejandra Gutiérrez, Jen Hickman and Michael Dowling. The comic devilishly fits into the current social and political context. The totalitarian government of the USA inclines to Christianity, feminism and conservatism. As a result, a fascist state is shaped. Queer people, kinksters and sex workers are absolutely not welcomed here but they somehow struggle to survive. A committed squad of sex workers gets fed up with the ruling regime and decides to put an end to it. The dystopian fiction was released before the recent turmoil in the USA and turned out to be quite prophetic. You can follow the adventures of its main characters on the Image Comics website or order a physical copy.

This one skilfully blends the captivating genre of a rock band saga with a romcom. Steg and Suria are punks, they both belong to The Rock Cocks bands and they are in love. At the very inception of the saga, they still stick to a more conventional lifestyle and spend dull days in the office. To a great enjoyment of their fans, they manage to quit the routine and turn into full-fledged rock evangelists. They make the most of their artistic freedom, recording smashing hits, touring extensively and enjoying infinite lewd encounters. Thanks to their fame, talent and glory they can live out the most daring fantasies that everyday people can only dream of.

You can peruse this one on the official website of its publisher, Slipshine, at no cost. Dozens of chapters are available there, plus, you can discover the freshest "tracks" (this is how the author calls the new installments of this comic) on Patreon.

Hopefully, this selection of top-notch free porn comics came in handy for you. With the help of this comprehensive guide, you won't waste too much time looking for a piece of art that will allow you to experience the most vivid emotions. The choice of adult comics online is unlimited and new titles keep springing up every day. After you build a certain background in this sphere, you will be able to objectively evaluate the merits of each comic. It will become obvious for you that this kind of art is just as praiseworthy and sophisticated as the more traditional paintings, novels or movies that we are used to classify as culture.